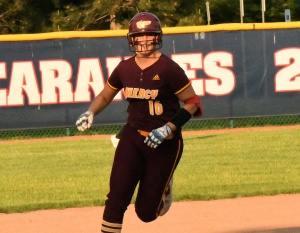 Homers, strikeouts and perfect games. Kaitlyn Pallozzi can almost do it all for the Marlins. Almost.

Kaitlyn Pallozzi is still trying to figure out how high school softball works.

No, not the pitching and hitting part. The Farmington Hills Mercy freshman definitely has that down pat.

We're talking about the most important side of the sport.

You know, the celebrating after big wins and the showboating after even bigger plays — all the fun stuff that comes with being the star pitcher on the No. 6-ranked team in Division 1.

Tuesday's matchup at Detroit Mercy is a perfect example of this.

Pallozzi rifled an absolute laser of a strike past Riverview Gabriel Richard slugger Megan Ratkewciz to record the final out of a 7-0 victory during the Catholic League Bishop tournament championship.

Instead of whipping off her facemask and tossing her glove toward the heavens, Pallozzi did a nice, slow jog to home plate and then softly slapped five with her assistant coaches and catcher Kat Burras.

And, well, that was it. It was like watching Barry Sanders flip the football to the side judge after scoring a rushing touchdown at the Pontiac Silverdome.

Come on! This is the CHSL championship we're talking about. RGR is the fourth-ranked team in D-4. You're playing on a Division I college softball field. The stakes couldn't have been any higher!

"I never celebrate!" Pallozzi said while blushing and laughing. "I never know what to do.

Well, when you're too busy practicing to be the best in the pitcher's circle, it's understandable if you're not exactly the fastpitch version of "Neon Deion" Sanders when you're touching 'em all.

And that's where Pallozzi's story starts (and continues) — with lots and lots of hard work.

She entered her freshman year at Mercy with 5 years of travel experience. Though, she admits her first two seasons were spent riding the bench.

But once she joined the Texas Glory Midwest club, things just took off for her. She's traveled around and has faced some of the top batters in the nation. When hitters were having their way against Pallozzi, her club coaches kept her in the games and encouraged her to pitch out of the jams. "That really pushed me to be better and to know my place and the expectations for myself," Pallozzi said. "They really pushed me to be a better pitcher. When I was struggling, I learned to have confidence in myself, which is the confidence I have today.

"So that's really how I got here."

That confidence has come in handy plenty this spring (but we'll touch on that later).

Marlins coach Corey Burras was excited when he learned Pallozzi was enrolling at Mercy a year ago. He had heard of the solid pitcher from Wixom and was familiar with her skillset.

But he didn't know what he had on his hands until he started working with her in January during throwing sessions for catchers and pitchers.

And neither did Kat Burras, Coach Burras' sophomore daughter, who is the team's starting catcher.

Three workouts a week turned into hangouts outside of throwing sessions.

"This is our first year working together, and I think working on and off the field has really helped our relationship," Kat said. "She's definitely a tough pitcher to catch for. She's got a great rise ball. Her fastballs are crazy. So practicing with her at every practicing and bonding outside of softball has been a way for us to hone in (our chemistry) during games."

And, yeah, the duo created instant chemistry. Like from the get-go.

Pallozzi threw a no-hitter in her debut start.

And only 3 days later, she tossed a perfect game — 21 strikeouts! — in a 1-0 win at Ann Arbor Gabriel Richard.

"It hurt a little bit after," Kat said of her glove hand following Pallozzi's big game. "But you know what? It's going to hurt no matter what I do when I'm catching for her."

Fast forward to today, and the duo is still working just as hard.

Pallozzi tossed another no-hitter in the CHSL championship, this time striking out 19 Pioneers through seven innings.

However, it wasn't as easy as it looks on paper.

Twice, during the third and fifth innings, Pallozzi stranded runners at first and second bases.

But it was nothing for her and Kat to get through the jam together.

"Kaitlyn makes Kat look good, and Kat makes Kaitlyn look good as well," Coach Burras said. "She's comfortable throwing those pitches (that get us out of jams) because she knows Kat's going to be a wall."

The funny thing is we've made it this far and haven't even talked about Pallozzi's moxie at the plate.

In fact, it was her sacrifice single to second base that drove home Izzy Chaput for the game's first run. And, with the Marlins clinging to just a 3-0 lead in the fifth inning, Pallozzi blasted a two-run home run to left-center to bust open the game and practically ensure RGR wouldn't have any chances of a comeback going forward.

Other highlights throughout the evening included Villanova signee Kendall Spivey singling through the third baseman's legs to push home Chaput in the third inning, Chaput sending home Charlie Lambert with a stand-up double that went about 195 feet in the fifth and Lambert securing the victory with a two-run homer in the sixth.

Pallozzi had plenty of breathing room when she took the circle for the final frame.

Following the Marlins' post-game chat with Coach Burras, Mercy's players reached their hands into a cooler to choose from quite the assortment of ice cream cones and other frozen treats. Leading the charge was Spivey, who was wearing a bright red clown's nose and joking around while snacking on ice cream and posing for pictures.

Now THAT is the way to celebrate a win. Hopefully the senior can give the rookie a few tips about letting loose after a big win before the season wraps up because Pallozzi has definitely earned the opportunity to let her hair down.

Maybe she will after the district final next week?